India has adopted the largest worldwide lockdown and 1.3 billion people must stay at their homes since March 25. To prevent the virus from spreading, the Indian government developed an app called Aarogya Setu to trace COVID-19 patients or suspected cases. Recently, there have been attacks from the government on the freedoms on the Internet, so the question of the tracing app raises concerns. As a member of the delegation for relations with India in the European Parliament, I have been watching the issue of digital rights for quite some time.

On March 25, the conservative Prime Minister Nárendra Modi announced a lockdown of the entire country, consisting of a few phases and ending in the second half of May. The residents—and especially the commuters—had only four hours to return to their homes or to buy necessary items. For now, restrictions have been relaxed to some extent. However, nationwide lockdown cannot be a long-term solution.

What is at stake?

India is going through the second phase of the lockdown. The government has relaxed restrictions on farming, banking, and public works; however, transport services and most businesses remain closed. Most of the measures were targeted at easing pressure on farming, which employs more than half the nation’s workforce and is essential to avoid food crisis, followed by a permission of resumption of manufacturing and farming activities in rural areas, where millions of daily wage earners were left without work.

Overall, factors that may aggravate the situation in India are:

Two factors might lead to experience lower overall mortality rates, on the other hand, such as warmer climate and low average age of the population.

Aarogya Setu: Is this app the solution?

As of today, India has reported 49,436 cases of the coronavirus and 1,695 deaths. As is already being widely discussed and implemented in the European countries, India is looking for possibilities of applying smart quarantine as well. Because of that, India launched its own app to trace COVID-19 patients called Aarogya Setu. The core of its operation is based on a Bluetooth handshake complemented by collection localization data from GPS. Aarogya Setu is not the only one used in the country; however, this one is supported by the government. 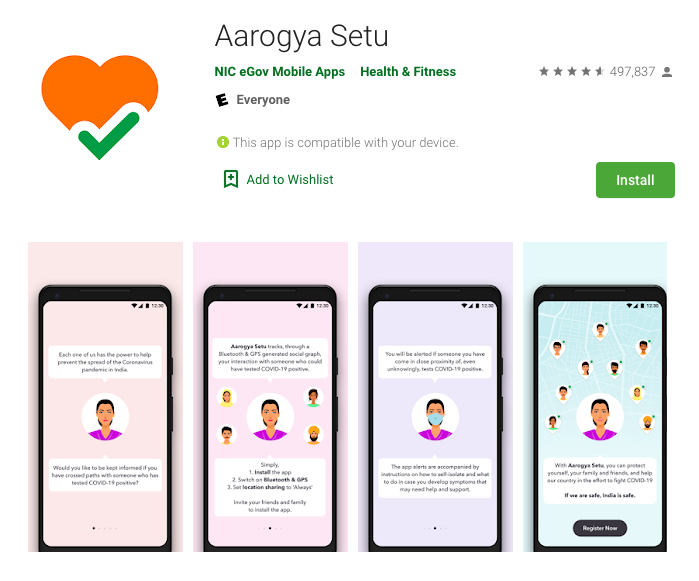 With the ubiquity of smartphones, which collect vast troves of personal information, surveillance can aid with rapid contact tracing. But owing to the peculiarities of the coronavirus, authorities across the world are beginning to realize the limited efficacy associated with respect to location surveillance. As a result, governments and other groups have released or are developing smartphone apps that use Bluetooth beacons to trace potentially infected patients.

In case of Indian Aarogya Setu, access to Bluetooth is key for the app to establish close range proximity between two people. When two smartphones with Aarogya Setu installed come in each other’s Bluetooth range, the app will exchange information and store it in the users' devices. If one of the two people tests positive, the app will alert the other person and shares the collected data with the government to allow tracing of potential cases. It remains a question, why the app also requests non-stop access to GPS location of users, while the Bluetooth solution should be sufficient by itself.

What is the risk?

The Indian government has crossed several boundries in recent months in terms of human rights violations. The shutdowns of the Internet in various parts of the country—because of the protest due to the Citizenship Amendment Bill—are the most actual examples. Therefore, there is high risk that applications could also be misused.

Why Aarogya Setu could be a potencial risk for person’s privacy? There is a plenty of concerns how app is inconsistent with the right to privacy:

Fortunately, Indian digital rights defenders—such as the Internet Freedom Foundation in Delhi—oversee the measures and inform about possible threats.

Applications for contact tracing must be voluntary. Solutions must be Open Source. Sensitive data must be stored locally on users' devices and only temporary, so that it cannot be abused once the crisis is over.