How are we doing in changing the way the European Parliament works? We pursue digitization, voting by roll call, and transparency of taxpayers' money spending.

Prior to the European Parliament elections in 2019, one of the main Pirate priorities was a free Europe that needed to be upgraded. European policy making should be more transparent and closer to the people. And since my election, I have been working hard on it.

Last year, we managed to endorse usage of Free and Open Source Software as a preferred solution in the European Parliament within the Parliament’s budgetary discharge report. This year, we increased the pressure and pushed through further amendments. That will lead to greater digitization and more transparent voting process and public budget spending. Citizens have placed their trust in our hands and have the right to know what their money is being spent on. What are the changes?

No more remote voting errors: verifiability of votes is essential

Due to the ongoing pandemic, voting has to be done remotely, in the digital space. That brings major challenges compared to physical voting: neither Members nor the public can see how the votes happen and they cannot be sure that the votes were counted correctly. 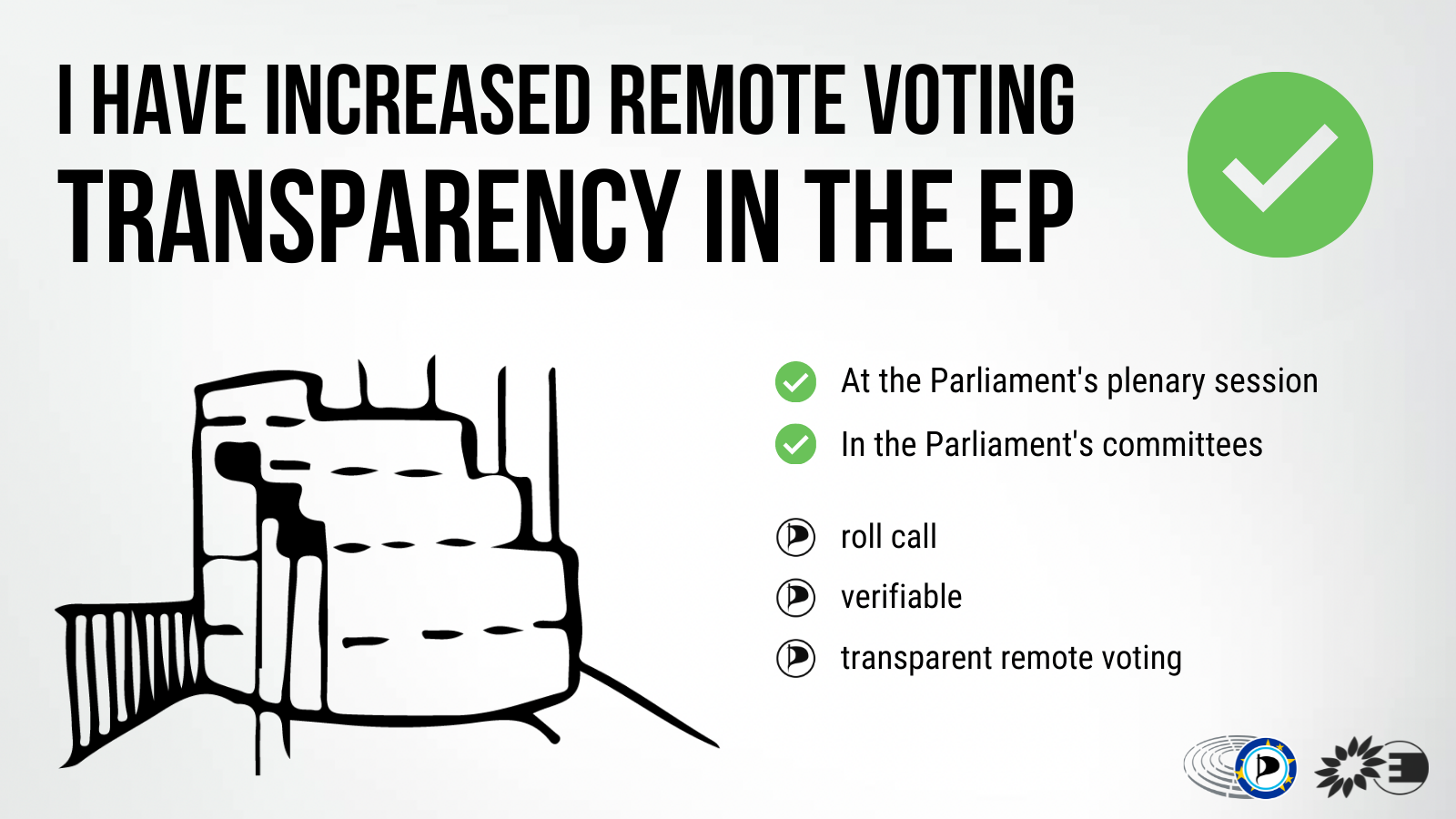 Better access from the public to MEPs' legislative work and vote

We have also succeeded in gaining support for the creation of a space on Parliament’s website where all the plenary voting records of each Member would be available. The votes would be divided per political group and nationality of Members visible and comparable.

The relevant services of the European Parliament have also been invited to study the feasibility and test the visualization of the most recent signed amendments in committees and in the plenary.

Members of the European Parliament have several budgets at their disposal, from which they draw funds for activities related to their mandate. For example, each Member receives 4,576 EUR per month as General Expenditure Allowance (GEA). However, currently it is not possible to verify whether the funds were spent correctly or whether someone enjoyed their vacation on the Maldives.

Unfortunately, although each Member of the European Parliament must have a separate bank account for the GEA, there is no obligation to publish expenses nor have it audited. Members don’t even have to keep the invoices and receipts. That has to change.

Public money, public code: Software in the European institutions should be Free and Open Source

Already in the last year’s discharge report, we pushed for the fact that Free and Open Source Software supposed to be the preferred solution. Anyway, then the pandemic came, and these solutions have been side-lined as part of the European Parliament’s Bureau priorities.

Why Free and Open Source Software (FOSS) solutions? The matter of security. The European Parliament and European institutions would retain control over their own technical systems. That is essential for limiting the risks and damages of cyberattacks that would threat their functioning. Free and Open Source Software allows for the identification and fixing of weaknesses and for designing solutions according to the European institutions' needs and specifications.

Finally, publicly financed software developed for the public sector should be made publicly available under a Free and Open Source Software licence. If it is funded with public money, it should be a public code as well. Free and Open Source software gives everyone the right to use, study, share, and improve the software. This right helps to promote other fundamental freedoms, like freedom of speech, free press, and privacy.