The case of WhatsApp’s new terms & conditions and the subsequent sharing of user’s data with Facebook has been trending in the on-line world during recent months. Many users were looking for a feasible solution and switched to alternative chat platforms. However, many of them also came back to stay in touch with friends who have chosen not to leave. WhatsApp’s story only emphasizes how dependent we are on dominant platforms. And a way out of the vicious circle is hard to find.

The Digital Markets Act, forthcoming European legislation, should redress these unequal market conditions, give smaller companies market space and give users more options. Will we be able to tame big players? And how will the rules affect each of us?

What is going on?

On-line platforms have significantly changed the digital economy over the last two decades. In the European digital economy, there are about 10,000 on-line platforms. Most of which are small and medium-sized enterprises; however, a small number of large companies have an enormous market share. Due to their dominant position, these large platforms have a significant impact on the digital market.

Their common feature is connecting many businesses with end users in exchange for their personal data. Such dominant position can have a negative impact on the quality of services and innovation. In some cases, they can even affect the functioning of democracy or for example voting of citizens in elections. In addition to unfair practices to users, they also have a negative impact on the fairness of competition.

In the market, they behave like gatekeepers, deciding who will have access to the digital market. The Digital Markets Act (DMA) should set rules for these gatekeepers—multinational companies such as Google, Facebook, Amazon, or Apple—and set the level playing field for competition among companies in the on-line environment. Leveling the competitive environment based on fair principles will lead to more diverse competition; hence, eventually users will have greater opportunities.

How do we recognize gatekeepers?

Gatekeepers—big technology giants—mostly play a leading role in their fields and occupy a dominant position in the market.

The proposal of the Digital Markets Act defines seven categories of products and services, in which we identify the gatekeepers, namely:

At the same time, to consider company as a gatekeeper it must meet three main criteria: 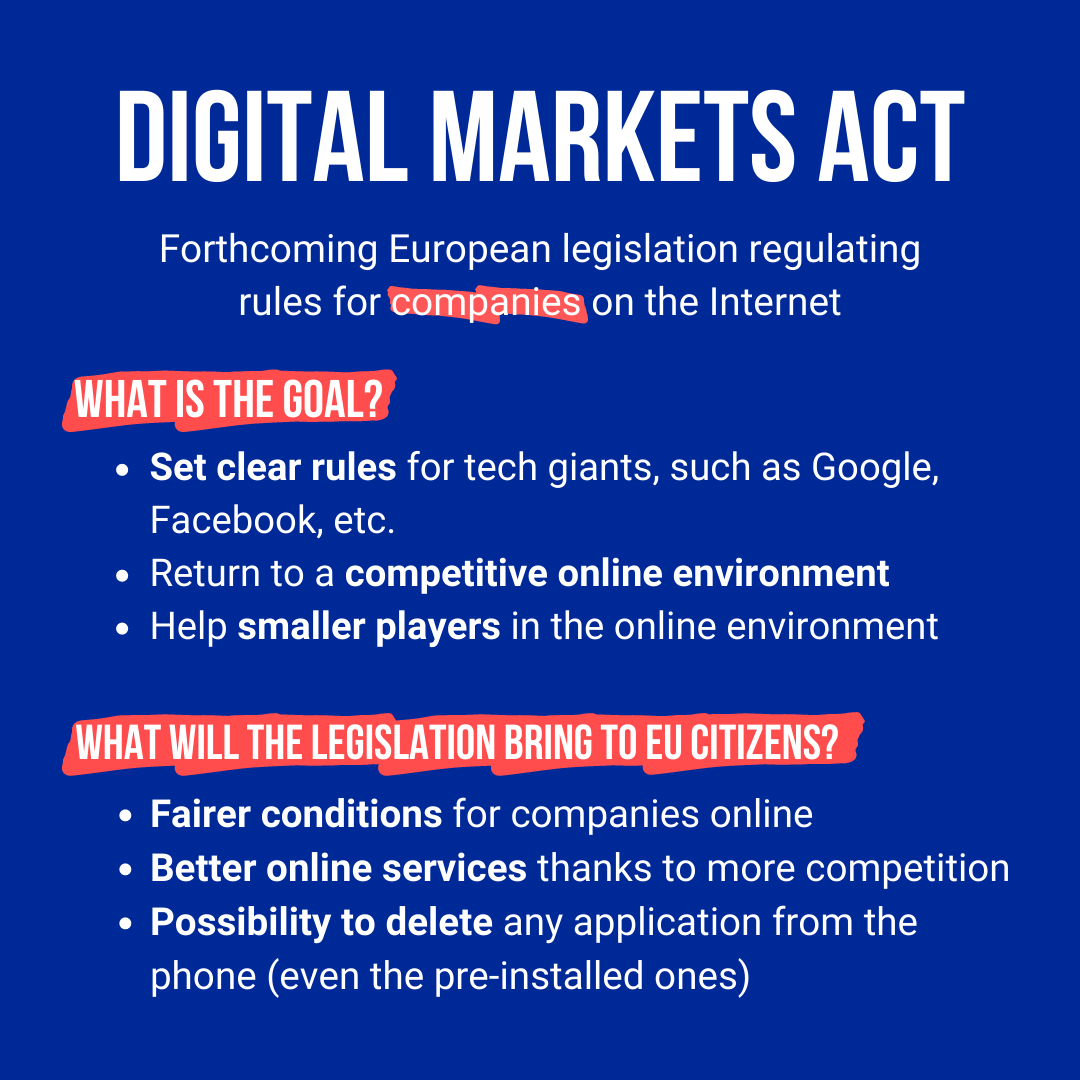 Unfair practices of app stores have an impact primarily on users

For example, Google Play is a typical service operated by a gatekeeper. This app store controls the Android platform on mobile phones almost of all brands. If a developer wants his app to be downloaded there, Google Play can’t be bypassed. Not only will the developer be left with nothing but access to the conditions, but users will also get smaller selection.

Between 2015 and 2018, Google decided to set even more drastic conditions. Every phone that wanted to have Google Play on their system—therefore, all Android devices—had to include pre-installed Google applications. They were fined after years of trial for violating the principles of competition, but it appealed and the solution continues.

A similar situation occurs in the case of the App Store on Apple devices, where the situation is already being addressed at the level of the European Commission. Spotify didn’t like having to pay a 30% fee on all transactions. This, of course, has an impact on the price of the subscription and puts Spotify and other competing services at a disadvantage compared to Apple Music.

Although we already have legislation that responds to possible breaches of competition principles, lawsuits often take up to six years. In the meantime, it happens that competitors do not endure these unfair conditions and cease to exist due to the oppression by the gatekeepers. Therefore, instead of the so-called ex-post rules, solving the problem after the act, we must set the ex-ante rules, when we already have pre-set rules.

Interoperability: a way to help small players gain a foothold in the digital marketplace

The planned interoperability should also ensure better conditions for users. Have you heard of the social network Mastodon? It is a decentralized Open Source platform allowing different organizations and individuals to run independent servers that are interconnected. In other words, there is no parent company to provide and manage this network. Users can choose which operator they want to register with, while still being in touch with other users who are logged in to other operators.

The good news is that Mastodon is not the only project based on this principle. For example, the PeerTube video sharing platform or messaging platforms such as Matrix or DeltaChat. Some, such as Briar, even operate on a peer-to-peer basis, without the need for a provider at all. We have many alternatives to choose from. But the question is, how to ensure that people can choose the platform exactly according to their liking and at the same time stay in touch with their friends on other platforms? The answer is interoperability.

If dominant platforms are required to provide other platforms with the ability to interconnect and ensure a seamless user experience, this will allow people to stay in touch with their friends without having to have 7 different applications from 7 different companies installed. It seems normal to us today to be able to send emails through different providers. Why can’t we send messages from one chat platform to another?

Thanks to interoperability, users will not only be able to communicate with friends across platforms, but also transfer their data from one to another, switch from one service to another, or just uninstall pre-installed software.

No to combining of our personal data

Tim Cook, CEO of Apple, recently admitted that Apple makes one acquisition every three to four weeks. Altogether, they have acquired approximately 100 companies in the last six years. But it is not the only technological giant to hunt smaller businesses. For example, you must have noticed a major acquisition of Google that acquired Fitbit. The original intention was to expand the collection of data from smart watches for use in better targeted advertising.

As there is currently no healthy competitive environment in many digital markets, small businesses have no choice but to be bought by large ones. Gatekeepers often acquire smaller companies to expand their portfolio of services. But often also to obtain our personal data, or simply to eliminate competition. If the gatekeepers did not perform these unfair practices, the market could offer more and better options. At the same time, we must ensure that user data is shared only with those platforms to which users have given their consent.

The pandemic in particular has increased the amount of time we spend on the Internet. However, as usual, the new era has brought not only benefits but also new threats to face. However, legislation setting rules in this area has not undergone a fundamental change for more than two decades. It is the Digital Markets Act that can help us meet today’s challenges.

Although the Digital Markets Act is an instrument of the internal market, it is important to keep in mind that everything should ultimately be about the users themselves, who should benefit directly. As the shadow rapporteur in the main committee for the Digital Markets Act—the Committee on the Internal Market and Consumer Protection (IMCO)—I am working to ensure that the act contains everything necessary.